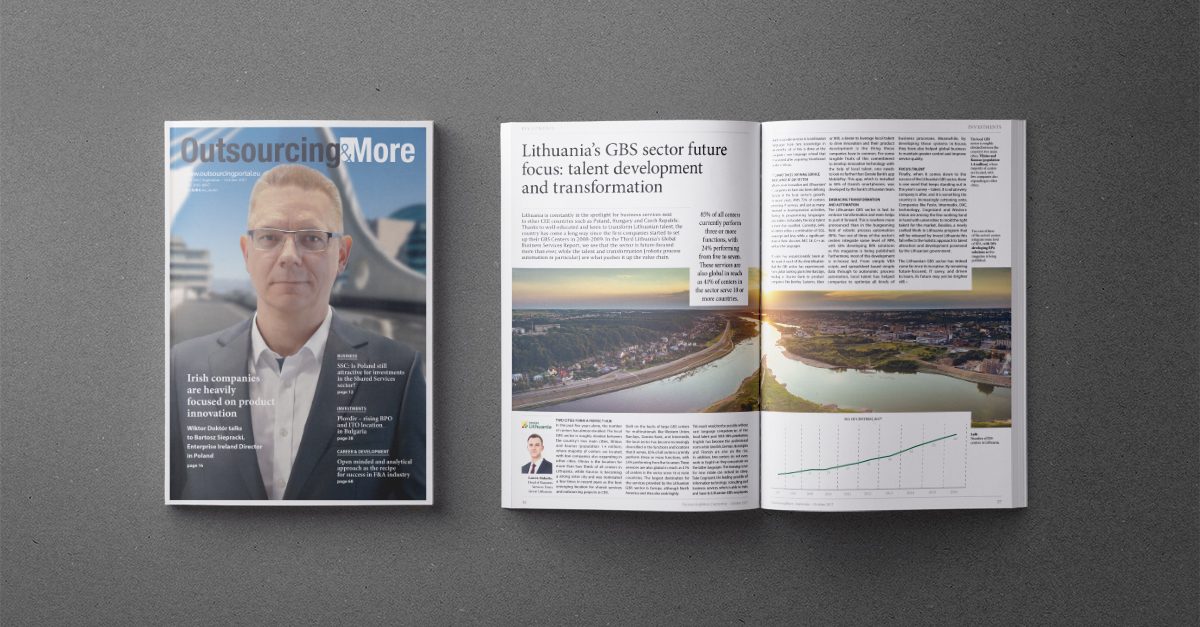 Lithuania is constantly in the spotlight for business services next to other CEE countries such as Poland, Hungary and Czech Republic. Thanks to well-educated and keen to transform Lithuanian talent, the country has come a long way since the first companies started to set up their GBS Centers in 2008-2009. In the second Lithuania’s Global Business Services Report, we see that the sector is future-focused more than ever, while the talent and transformation (robotic process automation in particular) are what pushes it up the value chain.

In the past five years alone, the number of centers has almost doubled. The local GBS sector is roughly divided between the country’s two main cities, Vilnius and Kaunas (population 1.4 million), where majority of centers are located, with few companies also expanding in other cities. Vilnius is the location for more than two thirds of all centers in Lithuania, while Kaunas is becoming a strong sister city and was nominated a few times in recent years as the best emerging location for shared services and outsourcing projects in CEE.

Built on the backs of large GBS centers for multinationals like Western Union, Barclays, Danske Bank, and Intermedix, the local sector has become increasingly diversified in the functions and locations that it serves. 85% of all centers currently perform three or more functions, with 24% performing from five to seven. These services are also global in reach as 41% of centers in the sector serve 10 or more countries. The largest destination for the services provided by the Lithuanian GBS sector is Europe, although North America and Asia also rank highly.

85% of all centers currently perform three or more functions, with 24% performing from five to seven. These services are also global in reach as 41% of centers in the sector serve 10 or more countries.

This reach would not be possible without vast language competencies of the local talent pool. With 98% penetration, English has become the professional norm while Swedish, German, Norwegian and Finnish are also on the rise. In addition, two centers do not even work in English as they concentrate on the latter languages. The learning curve for new intake can indeed be steep. Take Cognizant, the leading provider of information technology, consulting and business services, which is able to train and have its Lithuanian GBS employees ready to provide services in Scandinavian languages from zero knowledge in six months. All of this is done at the company’s own language school that it inherited after acquiring Storebrand center in Vilnius.

What is more, innovation and Lithuanians’ IT competencies have also been defining factors in the local sector’s growth in recent years. With 73% of centers providing IT services, and just as many involved in developmental activities, fluency in programming languages also matters. Fortunately, the local talent is more than qualified. Currently, 64% of centers utilize a combination of SQL, Javascript and Java, while a significant share of them also uses .NET, C#, C++ as well as other languages.

IT talent has unquestionably been at the heart of much of the diversification that the GBS sector has experienced. From global banking giants like Barclays, Nasdaq or Danske Bank to product companies like Bentley Systems, Uber or WIX, a desire to leverage local talent to drive innovation and their product development is the thing these companies have in common. For some tangible fruits of this commitment to develop innovative technology with the help of local talent, one needs to look no further than Danske Bank’s app MobilePay. This app, which is installed in 90% of Danish smartphones, was developed by the bank’s Lithuanian team.

The Lithuanian GBS sector is fast to embrace transformation and even helps to push it forward. This is nowhere more pronounced than in the burgeoning field of robotic process automation (RPA). Two out of three of the sector’s centers integrate some level of RPA, with 58% developing RPA solutions as this magazine is being published. Furthermore, most of this development is in-house led. From simple VBA scripts, and spreadsheet based simple data through to autonomic process automation, local talent has helped companies to optimize all kinds of business processes. Meanwhile, by developing these systems in-house, they have also helped global business to maintain greater control and improve service quality.

Finally, when it comes down to the success of the Lithuania’s GBS sector, there is one word that keeps standing out in this year’s survey – talent. It is what every company is after, and it is something the country is increasingly cottoning onto. Companies like Festo, Intermedix, DXC.technology, Cognizant and Western Union are among the few working hand in hand with universities to mold the right talent for the market. Besides, a newly crafted Work in Lithuania program that will be released by Invest Lithuania this fall reflects the holistic approach to talent attraction and development possessed by the Lithuanian government.

The Lithuanian GBS sector has indeed come far since its inception. By remaining future-focused, IT savvy, and driven to learn, its future may yet be brighter still.