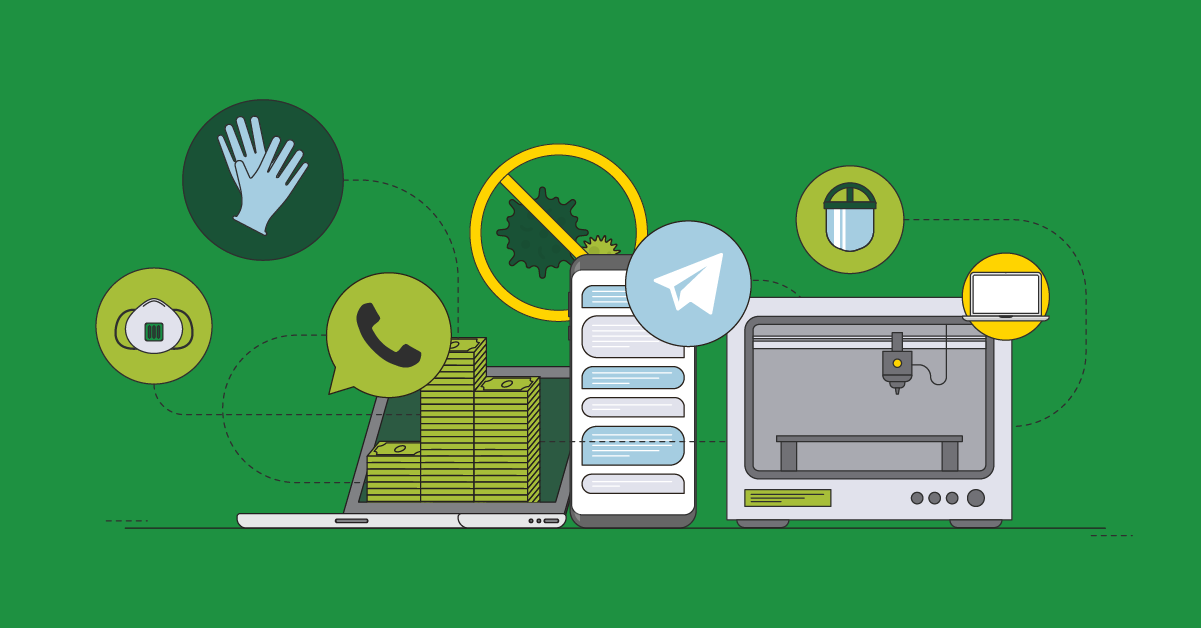 As one of the first countries in Europe to declare a State of Emergency Lithuania has responded rapidly to the COVID-19 pandemic. The announcement of such a sudden and dramatic change could have caused panic, but instead has sparked creativity and a strong community feeling, with tech gurus raising funds for doctors and thousands taking the initiative to develop new solutions for unprecedented problems.

A crisis of this nature not only disrupts the day-to-day functioning of a country’s economy, but also brings to light its underlying social features, from adherence to social norms in Japan, to vigilance in Taiwan, and community spirit in Italy. In Lithuania, the response has echoed the country’s pro-independence movement of the 1980s, with solidarity, self-organization and creative problem-solving featuring strongly.

Lithuania businesses, NGOs and volunteers are going out of their way to support frontline medical staff. Tech companies like Tesonet, Trafi, Vinted, TeleSoftas and dozens of others raised north of €300,000 from the biggest players in Lithuania’s tech community with “no phone calls, no meetings, just WhatsApp/Messenger/Telegram,” while television station Laisvės TV has so far collected nearly one million euros to buy masks, respirators and other much-needed gear. As medical professionals are overwhelmed with calls, coders have deployed a Facebook chatbot providing all necessary information. And it’s not just the tech community helping out. For example, an acclaimed fashion designer has overhauled his production line to make H10-grade respirators and is targeting 120,000 units.

Funds and equipment are not the only things Lithuanian’s are contributing in this time of turmoil. Skills and lateral thinking are just as essential for saving both lives and the economy. On March 20-22, around 1,000 people took part in the virtual hackathon Hack the Crisis. The challenges that were tackled during the event included disruptions to the supply chain, information verification, ways to help small businesses compete in the digital economy, and more. The hackathon was organized by Vladas Lašas, the Lithuanian businessman behind the country’s attempt to woo Elon Musk by building a Gigafactory… in Minecraft. The solutions proposed during the hackathon have already been included in There is no Quarantine on the Internet, a governmental program that is seeking to unite the country’s SMEs on a single e-commerce platform.

Solidarity is being seen across all levels of society in Lithuania. To help citizens reach out to the elderly and other vulnerable members of society, three Telco companies joined forces to launch a volunteer coordination hub in just 24 hours. Vilnius municipality announced “nightcare” centres, so medical workers working night shifts have a place to leave their kids. And to support children continue to study remotely while schools are closed, an initiative for donating or lending computers to children who don’t have access to a PC has been set up. Restaurant chains are delivering free food to doctors and volunteers, Scouts are manning an “outdoor waiting room” next to the country’s main Infectious Diseases hospital, and local urbanists are creating interactive maps using open data to show which parts of the city have the highest concentrations of at-risk citizens. These are just some of the examples of how Lithuanians are coming together in the fight with COVID-19.

“Today, we see the same solidarity as we saw in 1989, when 2 million people formed a human chain from Vilnius to Tallinn. Students, entrepreneurs, developers are going out of their way to give our doctors the 110% support they need. These are hard times, but the lessons we learn today – that great things can be achieved together – are going to inspire the next generation,” says Mantas Katinas, Managing Director at Invest Lithuania.