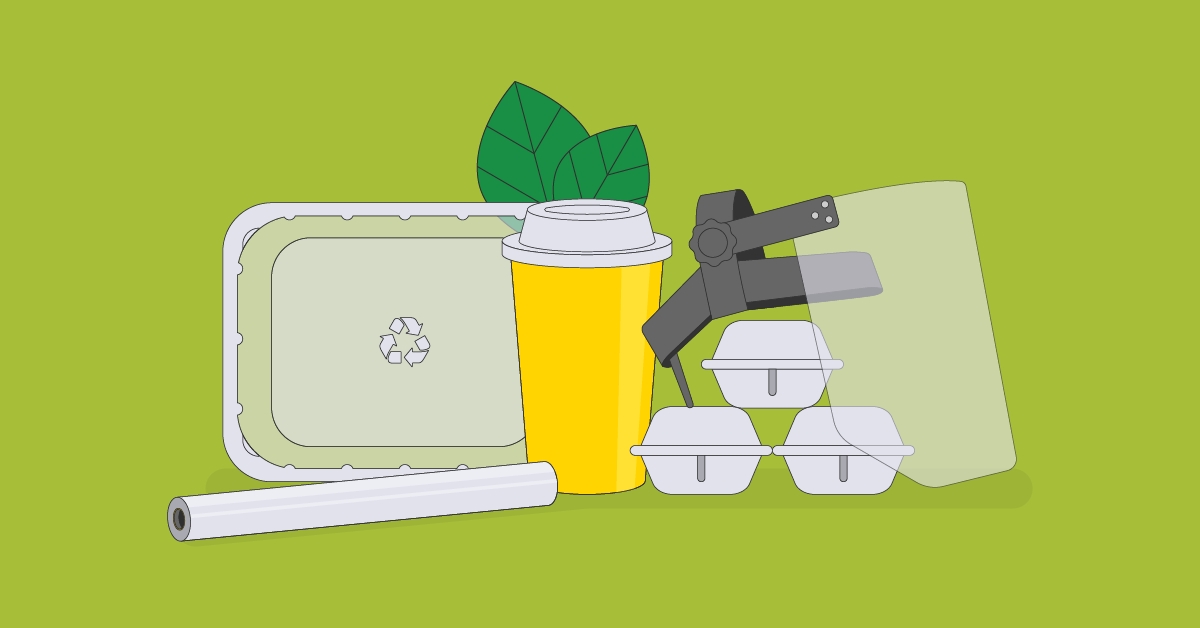 Plastics companies operating at Klaipeda Free economic zone (FEZ) have experienced minimal impact by the COVID-19 outbreak so far. On the contrary, plastics companies are facing increasing demand, opening the new product and sales segments and gaining new arguments within the society. However, their turnover already was and can be further impacted by falling raw material and oil prices.

Klaipeda FEZ is the largest plastics hub in the Baltics where five companies achieved a total turnover of 890M EUR in 2018, amounting to nearly half of Lithuania’s plastics total. According to preliminary data, the total turnover of Klaipeda FEZ plastics companies stayed about the same last year. While the production output further increased, the fall in oil prices of 2019 impacted both other raw materials and, consequently, the pricing of end products. For these reasons, Klaipeda’s plastics companies are reluctant to forecast their 2020 results at this point. While the demand for some current and new segments has increased over the past few weeks, it is still unclear how oil prices and the state of the global economy will develop.

A growing need for safety and hygiene

Pack Klaipeda, the makers of egg trays and disposable polystyrene foam dishes, have probably the most positive outlook in today’s situation. Curiously, only a year go the company was uncertain about its future as the European Parliament approved the single-use plastics (SUP) directive. Today though, Pack Klaipeda already has a new polypropylene packaging production lane that doesn’t fall under limitations set by the EP. The company also has a record number of employees and estimates to have achieved a 30% annual revenue increase in the first quarter of this year. Last year, according to preliminary data, Pack Klaipeda posted a 3,4% revenue increase to 9,2M EUR, but it expects a 17% growth this year.

“I believe the COVID-19 outbreak, lockdowns and quarantines have brought the consumers back to reality when it comes to safety and hygiene that disposable packaging brings to the food industry. At the same time, the restrictions for the restaurant segment and full hospitals have led to a major jump of demand for PS packaging for takeaway food. We are also seeing some of the customers from the catering industry who were previously exploring paper laminate packaging and other alternatives, massively returning to safe and proved PS solutions. All these factors have contributed to at least a 30% increase in demand in our main markets – Lithuania, Scandinavia, Germany and Poland,” says Vytautas Butvilas, the CEO of Pack Klaipeda.

Limited only by physical factors

Retal Industries group sees the recent developments from a quite positive perspective. In Klaipeda FEZ, it owns one of the largest European PET producers NEO GROUP, and an HDPE caps and APET film manufacturer Retal Baltic.

The latter company, according to preliminary data, generated 46M EUR in revenue last year, a 4,2% decrease since last year. However, the company output amounted to 22.400 tons and was only 2,6% smaller than in 2018. The company suggests that a significant part of revenue decrease can is due to the drop in PET materials prices. At the same time, though, the company’s profit grew by 6% last year. This year Retal Baltic plans to employ the expansion projects of 2019 fully and to increase output to 28.000 tons. Consequently, it expects the revenue to grow by 20% to 54,5M EUR.

“Both of our core products – HDPE caps for drinks packaging and food-grade APET film – remain strategically important even under the circumstances of business and society restrictions. Since the COVID-19 outbreak, we have witnessed a slight increase in demand from our existing customers. However, some projects with our new and prospective customers have temporarily stalled. That is because some testing, equipment set up, auditing, aligning and other processes are always needed when onboarding new customers,” says Viktorija Jurevičiūtė, the CEO of Retal Baltic.

As Retal Baltic increased its production capacity of caps by 15% and for film by 35%, the company expects the revenue from these segments to grow in line with these numbers. While numbers from March and early April look good, and this plan is currently under control, prolonged lockdowns and quarantines may impact projects with new customers.

“We aren’t concerned too much as we have been paving long term relations with our customers. However, we are aware that the pandemic impacts various processes for both our partners and us. For instance, we were planning to upgrade some of our equipment, but our suppliers from Northern Italy aren’t currently operating. We expect to be late with this particular project for not more than a few months. Another challenge is the decrease in deposit PET bottle collection and recycling: consequently, there are fewer materials in the secondary PET market, and the prices are growing. However, oil as the primary material for PET – is getting less expensive,” says V. Jurevičiūtė.

They also admit that decisions for future investment and expansion projects are currently on hold at both Retal Baltic and its international partners. However, the company is eager to resume this decision making once the situation becomes more stable.

In March, Retal Baltic provided more than 3 tons of particular APET film to Lithuanian makers’ community manufacturing protective shields for medics. The company has even modified some of its production processes to pursue this initiative. V. Jurevičiūtė says this contribution was pro bono. However, the company sees demand for such materials from the commercial segment. In the short run, such materials for protective shields may account for 2-3% of Retal Baltic’s portfolio. However, this demand should significantly decrease or disappear after the pandemic goes away.

“Speaking of the long run though, it’s obvious that product safety, sterility and long shelf life have now become incredibly important factors in the society, though only plastics industry insiders have been talking about this. The current situation has shown that we should split the features of packaging materials from the questions of their use, collection and recycling. I’m certain that the ‘safety first’ principle will stick around for a long time among the consumers. Of course, we do support the efforts in the circular economy, recycling and environment. Still, it now becomes clear that market and its regulators won’t be able to ignore the basic need of safety,” V. Jurevičiūtė contemplates.

NEO GROUP, one of the largest European PET producers, says it currently works in full capacity. However, some minor challenges followed the first days of the lockdown in the logistics chain.

“The food industry and related activities were pronounced strategic during the pandemic, and so our production is in full swing. The demand for packaged food currently grows; it is both fuelled by safety and longer shelf life that decreases the number of ventures to shops. We also see an increase in demand for segments such as bottles for disinfection liquids and the medical sector – the market needs more test containers, medicine packaging and other products that use the PET,” says Paulius Ambrazaitis, the chairman of NEO GROUP.

According to preliminary data, the NEO GROUP’s production increased by 15% last year, though the turnover dropped by 6% to 508M EUR due to the drop in raw material prices. Currently, NEO GROUP is fulfilling its first-quarter plans and expects at least ‘stable’ sales for the rest of the year.

“We’ve heard negative feedback from the society regarding the plastics. It seemed that plastics are enemy No. 1. Now though, as the world is facing a major pandemic, we see an increasing understanding that plastics packaging is probably the safest one, it has great barrier properties and prolongs the shelf life of products. Plastics are also needed everywhere – for the production of medical masks, shields, disposable clothing. The latter is made of polyethene, polyester, PET. Safety is the main priority now. However, as consumers, we should remain responsible by recycling and not littering,” says P. Ambrazaitis who also stresses NEO GROUP’s commitment to circular economy efforts, as well as research and investment in this field.

Another Klaipeda PET giant – Orion Global PET, the member of Indorama Ventures family, is a little reserved, but still very confident today. The company says its production, planning and payments among the supply chain have all been steady, but logistics and supply processes now require a bit more effort from the company.

“I’d like to believe that eventually, the focus of the society will return to the areas of environment and packaging, but selective facts will not manipulate consumers. After the pandemic is gone, we shall further strive to introduce society with our operations, to deepen its understanding in PET during our educative meetings with school and university students, meetings with other industry players. In conferences,” J. K. Malik says.

He also adds that the company has tested remote work during the lockdown, and it worked very well.

Eimantas Kiudulas, the CEO of Klaipeda FEZ management company, says he’s happy about the resilience of the plastics sector, as well as about its possibilities to react to this unprecedented situation quickly. He believes that the current situation will also increase the interest of the youth to study the plastics and the polymer sectors and to contribute to research and novelties in both the circular economy and the creation of new products. In the long run, the number of qualified specialists will be a crucial factor when companies are considering new investment and high-value-added production.

“I am also very proud that our plastics companies have helped the medics and other people who are now relentlessly fighting for our health and safety. On top of Retal Baltic’s contribution that helped to manufacture tens of thousands of protective shields, ORION GLOBAL PET has delivered generous financial and equipment contributions for Klaipeda hospitals. The NEO GROUP has delivered disinfecting liquids to Gargždai hospital, Baltijos high school, as well as financial help and other measures for other Klaipeda region hospitals. Finally, “Pack Klaipeda’ were kind enough to provide three Klaipeda hospitals with their takeaway food packages for free, even though it is their core business that now sees a massive increase in demand,” says E. Kiudulas.