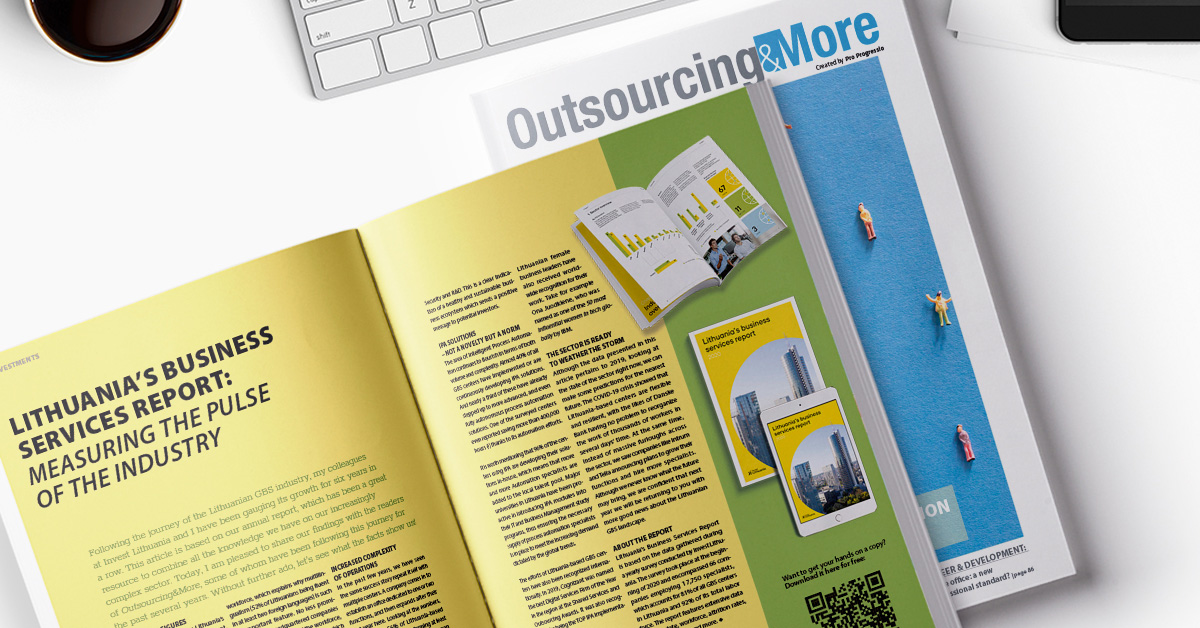 Lithuania’s Business Services Report: measuring the pulse of the industry

The following article by Laura Kavaliauskaitė, the Head of Business Services and ICT Team at Invest Lithuania first appeared in the Outsourcing&More magazine. You can find the original here.

Following the journey of the Lithuanian GBS industry, my colleagues at Invest Lithuania and I have been gauging its growth for six years in a row. This article is based on our annual report, which has been a great resource to combine all the knowledge we have on our increasingly complex sector. Today, I am pleased to share our findings with the readers of Outsourcing&More, some of whom have been following this journey for the past several years. Without further ado, let’s see what the facts show us!

For the sixth year in a row Lithuania’s GBS sector has demonstrated consistent, sustainable growth. Last year, the sector saw a 14% rise in employment figures. That’s 2,300 new jobs for ICT professionals, Developers, Automation specialists, Finance experts, Client Service agents and other talents. In total at the end of 2019 the GBS sector consisted of 81 dedicated centers employing around 19,300 people.

Looking at the results of our survey, we see that GBS centers’ managers highlight five advantages that Lithuania offers them. Namely, the availability of well-educated specialists, competitive labor costs, a well-developed IT & TelCo infrastructure, multilingualism, and last but not least, social climate and quality of life. These advantages were certainly on the checklists of the four Fortune 500 companies (Oracle, McKesson, Dana, AmerisourceBergen) that joined the Lithuanian GBS family last year.

Last year’s results solidified the notion that Lithuania is a prime GBS destination for Nordic companies. In fact, currently every other center is operated by companies headquartered in the Nordics. These centers employ over a third of the sector’s workforce, which explains why multilingualism (52% of Lithuanians being fluent in at least two foreign languages) is such an important feature. No less prominent are US-headquartered companies that account for 35% of the workforce, largely thanks to Western Union, which operates its largest division worldwide (2000 specialists and counting!) in Vilnius.

With all the recent growth, it is reassuring to see that the saturation rate in Vilnius remains healthy. With 29.8 in 1000 inhabitants employed in Vilnius-based GBS centers, the capital is still several times less saturated than places like Dublin, Krakow and Wroclaw. Kaunas has even more space to grow, with just 10 in 1000 inhabitants working in the sector. Comparatively low saturation levels offer companies of all sizes the opportunity to stand out as attractive employers. At the same time, the industry is mature enough to offer experienced talent.

In the past few years, we have seen the same success story repeat itself with multiple centers. A company comes in to establish an office dedicated to one or two functions, and then expands after their first year here. Looking at the numbers, we see that 56% of Lithuania-based centers are currently performing at least 8 functions. Some of the most common functions are Software Development (45% of centers), Accounting (45%) and Analytics (29%). In addition, over a fourth of the centers work with Big Data and almost a third carry out Product Development as one of their functions.

A number of GBS centers surveyed mentioned further plans to extend their presence in Lithuania by expanding their current functions or introducing new ones, such as AML/KYC, AI, Robotics, Intelligent Process Automation (IPA), Cyber Security and R&D. This is a clear indication of a healthy and sustainable business ecosystem which sends a positive message to potential investors.

IPA solutions – not a novelty but a norm

The area of Intelligent Process Automation continues to flourish in terms of both volume and complexity. Almost 40% of all GBS centers have implemented or are continuously developing IPA solutions. And nearly a third of these have already stepped up to more advanced, and even fully autonomous process automation solutions. One of the surveyed centers even reported saving more than 400,000 hours (!) thanks to its automation efforts.

It is worth mentioning that 96% of the centers using IPA are developing their solutions in-house, which means that more and more Automation specialists are added to the local talent pool. Major universities in Lithuania have been proactive in introducing IPA modules into their IT and Business Management study programs, thus ensuring the necessary supply of process automation specialists is in place to meet the increasing demand dictated by the global trends.

The efforts of Lithuania-based GBS centers have also been recognized internationally. In 2019, Cognizant was named the best Digital Services Firm of the Year in the region at the Shared Services and Outsourcing Awards. It was also recognized for being the TOP IPA Implementation of the Year.

Lithuania remains 1st in the EU for the share of women in the labor force. And this general trend is reflected in Lithuania’s GBS sector, where women comprise 54% of the workforce. More importantly, Lithuania’s GBS industry is leading the way in gender equality not just in terms of the total number. The representation of women in leadership roles keeps growing. Currently, 51% of senior management positions in the sector are held by women.

Lithuanian female business leaders have also received worldwide recognition for their work. Take for example Ona Juodkiene, who was named as one of the “50 most influential women in tech globally” by IBM.

The sector is ready to weather the storm

Although the data presented in this article pertains to 2019, looking at the state of the sector right now, we can make some predictions for the nearest future. The COVID-19 crisis showed that Lithuania-based centers are flexible and resilient, with the likes of Danske Bank having no problem to reorganize the work of thousands of workers in several days’ time. At the same time, instead of massive furloughs across the sector, we saw companies like Intrum and Telia announcing plans to grow their functions and hire more specialists. Although we never know what the future may bring, we are confident that next year we will be returning to you with more good news about the Lithuanian GBS landscape.

Lithuania’s Business Services Report is based on the data gathered during a yearly survey conducted by Invest Lithuania. The survey took place at the beginning of 2020 and encompassed 66 companies employing 17,750 specialists, which accounts for 81% of all GBS centers in Lithuania and 92% of its total labor force. The report features extensive data on real estate, workforce, attrition rates, education quality and more.

Want to get your hands on a copy? Download it here for free here.