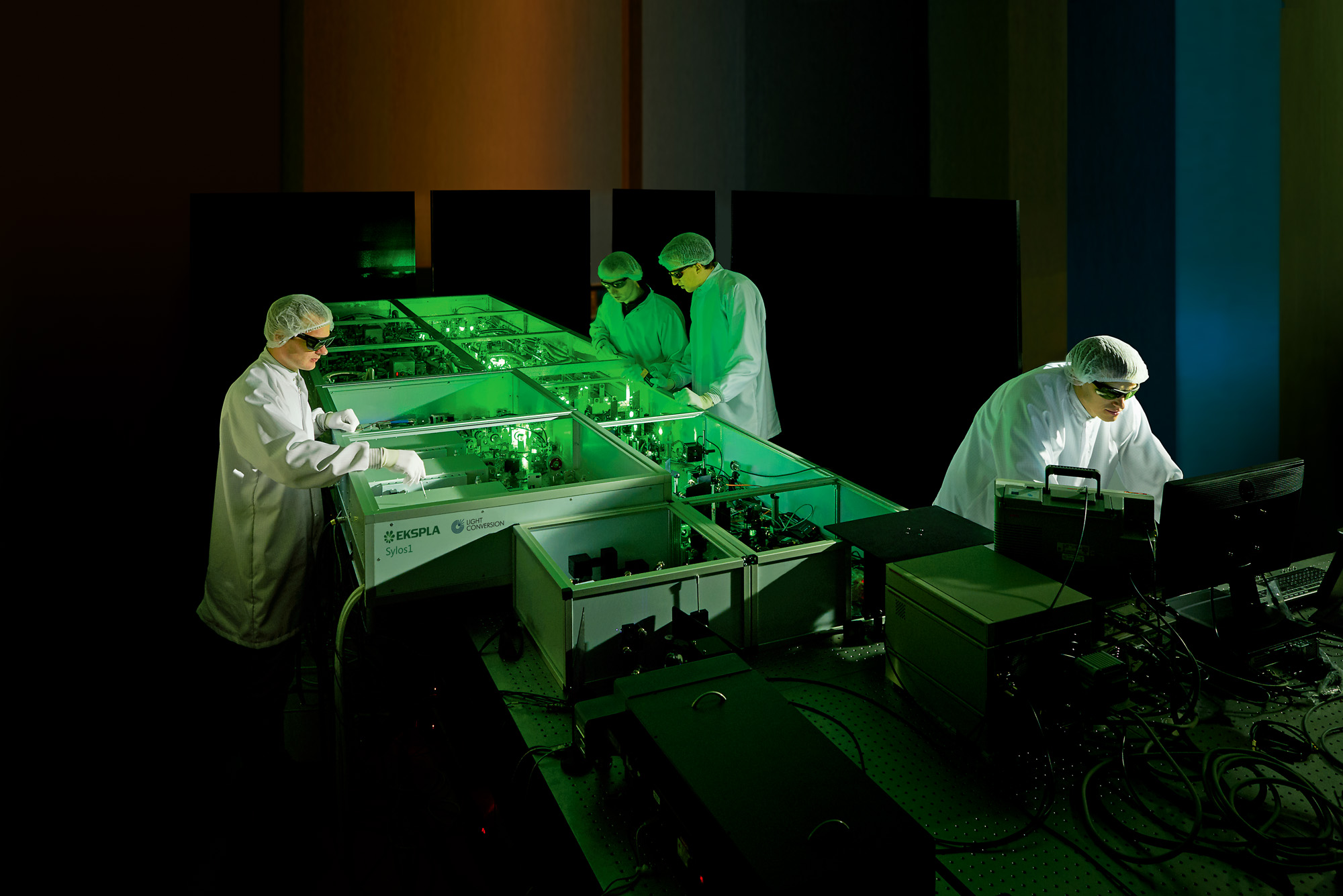 On May 15, the Lithuanian-made SYLOS laser system, one of the most powerful laser systems in the world, began work at Hungary’s Laser Research Centre, Verslo žinios reports.

“Although lasers represent a relatively small share of Lithuania’s overall export market, they make Lithuania famous around the world, and advance global science. The need for laser technology worldwide is constantly increasing, so the development of unique products and participation in such large international projects provides greater opportunities and further strengthens Lithuania’s position in laser science and industry,” says Gintaras Vilda, Vice Minister for the Economy and Innovation, who participated in the ceremony.

The idea to create the SYLOS single-cycle femtosecond high-intensity laser system originally came from Nobel Prize winner Prof. Gérard Mourou, who launched the system by pressing an improvised black button at the opening ceremony. Femtosecond pulses – one of the shortest pulses artificially created – were registered, and were visualised on a projector screen in front of a large auditorium at the International Laser Research Centre’s laboratory for Extreme Light Infrastructure-Attosecond Light Pulse Source (ELI-ALPS) in Szeged, Hungary.

Two major Lithuanian laser manufacturers, Ekspla and Light Conversion, were asked by the ELI Centre to develop and build the system. The two companies combined their technologies to create a laser that’s the largest among the world’s fastest lasers, and the fastest among the world’s largest lasers. The fruit of this five-year collaboration is the Single Cycle Laser SYLOS, which employs OPCPA technology invented by a Lithuanian research group at Vilnius University under Prof. Algis Piskarskas. The system generates high-intensity, ultra-short pulses whose peak power is 1,000 times greater than that of the most powerful nuclear energy plant in the US. It’s a development that would have not been possible for a single company to achieve on its own.

The pulses generated by the SYLOS system will be used in fundamental research, to investigate the peculiarities of electron movement in atoms and molecules. In addition to industrial, biological and medical applications, the laser system will be employed in a project to develop a new way to neutralise nuclear waste, based on the ideas of and in cooperation with, the Nobel laureate Gérard Mourou and his coworkers,

“By combining the expertise of leading scientists and engineers at the Hungarian ELI with technologies developed at Vilnius University and mastered by two Lithuanian laser companies, Ekspla and Light Conversion, together with the most advanced technologies from other countries including France, the United States, Germany and others, we have achieved a unique combination: extreme parameters plus exceptional user-friendliness,” explained Kęstutis Jasiūnas, CEO of EKSPLA. “It’s clear that even small countries such as Lithuania and Hungary can make a huge contribution to the future of laser technology.”

ELI-ALPS is one of the three pillars of Europe’s Extreme Light Infrastructure, created to deepen understanding of fundamental physics by providing high-repetition-rate, intense light pulses on the attosecond timescale. ELI is the first international infrastructure for interdisciplinary laser research. It is coordinated by France, and currently involves 13 other countries. ELI has provided a model for the development of three new laser centres in the Czech Republic, Hungary and Romania. Each of these centres will be equipped with a range of powerful, advanced lasers for research in specific fields. Lithuanian companies, together with their partners from the US, have won the tender to manufacture equipment for the centre in the Czech Republic.