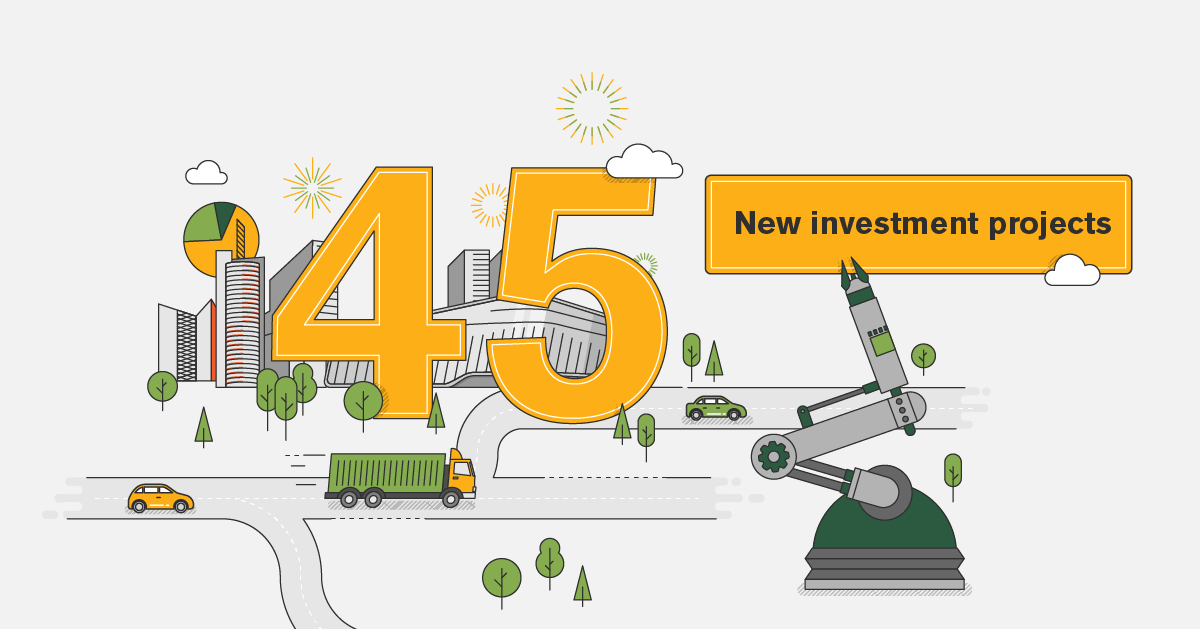 2018 was another record-breaking year for Invest Lithuania, with a record 45 foreign direct investment (FDI) projects attracted. Combined, these newly attracted projects are set to create 4,600 new specialist positions. And the country is gaining real momentum as a high added value investment location, with every new project helping to further raise its profile and reputation. In 2015, 28 FDI projects were announced, a number which jumped to 36 in 2016, and then reached 39 in 2017, before last year’s new record. And a diverse range of factors is driving this impressive growth: the rapid expansion of specialist sectors such as Fintech, the continued diversification of the country’s Global Business Services (GBS) sector, and Lithuania’s emergence as an attractive R&D location.

One significant trend of 2018 was that the projects attracted were in high-added value sectors of the economy, and the jobs they are creating will bring substantial salaries and opportunities for career development. As Virginijus Sinkevičius, Lithuania’s Minister of Economy and Innovation points out, “the foreign companies that chose Lithuania last year are planning to pay salaries 2-4 times higher than the country’s average.”

This factor helps to off-set the leveling out in the number of jobs created by foreign direct investment in 2018. While the figure of 4,600 is certainly still high compared to the 2,370 jobs that were created just 3 years earlier, it represents a slight decrease from 2017, where major manufacturing investments pushed the job count up to 5,000. But, as Minister Sinkevičius argues, 2018’s results stand for quality over quantity: “While these projects cannot be compared with big manufacturing projects in terms of the number of jobs, they create high-value added positions and are helping Lithuania to grow in industries that will make up the backbone of the economy in the future.” And according to Invest Lithuania, investors no longer count cheap labour costs as one of Lithuania’s advantages, stressing instead the extensive talent pool and favourable business environment. Companies that initially plan to set up a small team often grow further and faster than expected once they recognize the opportunities on offer.

One key driver in Lithuania’s ability to attract high-end international investment has been its consistent focus on specialist industries where it offers a competitive advantage. The most striking example of this has been Fintech. Thanks to radical reforms of its regulatory framework, and a pool of skilled talent in IT and finance, Lithuania’s Fintech sector is thriving. The Bank of Lithuania has now issued over 100 licences to Fintech companies to conduct operations across the EU. “Financial technologies are a niche in which Lithuania can become a leader, because here enterprises find not only a progressive regulatory environment with access to the whole EU, but also a pool of strong talent that enables them to develop cutting edge financial solutions,” states Mantas Katinas, Managing Director of Invest Lithuania.

And 2018 was a breakthrough year for this key sector, with major global Fintechs choosing to make Lithuania their EU base. “While Lithuania’s Fintech industry was undoubtedly strong, it lacked the recognition a world-famous name brings. But last last year two such names arrived – Revolut and Google. The recognition of such well-known players means that other high-caliber companies are going to consider Lithuania as a possible location for expansion. And now we are talking not only about the Fintech sector, but about the wider technology market,” Mr Katinas concludes.

While Fintech, and the tech sector in general, is at lift off stage, Lithuania’s GBS industry is diversifying and maturing, with a host of international companies operating high-end, multifunctional centers. This sector has historically been Scandinavia-oriented, but in 2018 it took on a distinctly American flavor, particularly with the arrival of the financial markets giant Moody’s. “Moody’s operations in Lithuania will be the biggest project we have seen in terms of sophistication of functions and projected growth in the business services sector. This project is as important to the country’s GBS sector as last year’s major automotive investments were for the manufacturing industry. This investment will propel the sector to a higher level and will help Lithuania to become a leader of the business services sector in Central and Eastern Europe,” commented Minister Sinkevičius on the arrival of Moody’s.

With more than 17,000 now employed in the sector (according to data from Invest Lithuania), it is becoming increasingly specialized and offers highly complex services. “Almost half of the country‘s GBS centres develop robotic solutions themselves,” explains Mr Katinas. “Financial and IT operations of varying difficulty, data analysis, and product development are just some of the many complex functions that are performed by Lithuanian centres,” he continues. “And the likes of Moody’s, plus other international businesses who set up in 2018 such as West and Yara, are adding completely new competencies to the market that are going to resonate positively across the sector.”

2017 was a breakthrough year for Lithuanian manufacturing with major investments into the automotive sector, and in 2018 this growth was consolidated by the strengthening of Lithuania’s R&D provision for international companies. Convious, a Dutch AI solutions developer, and Tonbo Imaging, who develop autonomous vehicle systems, were amongst a number of firms who decided to set up R&D facilities in Lithuania in 2018. These companies benefit from both a business-friendly environment and highly-educated talent.

And it was education that led to another 2018 manufacturing success story. UK company Intersurgical, which already has one facility in Lithuania, took the decision last year to build a manufacturing complex in the city of Visaginas. And this city was chosen because Intersurgical has been offering apprenticeship opportunities to Mechatronics students at the Visaginas Vocational School since 2016. As Minister Sinkevičius explains, this project is an excellent example of “how a successful collaboration between a vocational school and a business can significantly change the future prospects of a whole region.” Other regions outside Lithuania’s two main cities, Vilnius and Kaunas, also received strong interest from foreign investors in 2018. For example, a €20 million industrial gas production plant is going to be built in Kėdainiai Free Economic Zone.

Lithuania’s success in FDI received strong recognition in 2018, with the country rising to 14th in the World Banks’ Doing Business ranking. This means Lithuania is now the highest rated country in the CEE region for its business environment. “This record rating gives us an additional advantage, especially at the first stages of location selection when companies are deciding which countries to consider,” highlights Mr Katinas. A new flight connection established between Vilnius and London City airport last year is another valuable advantage on offer to investors.