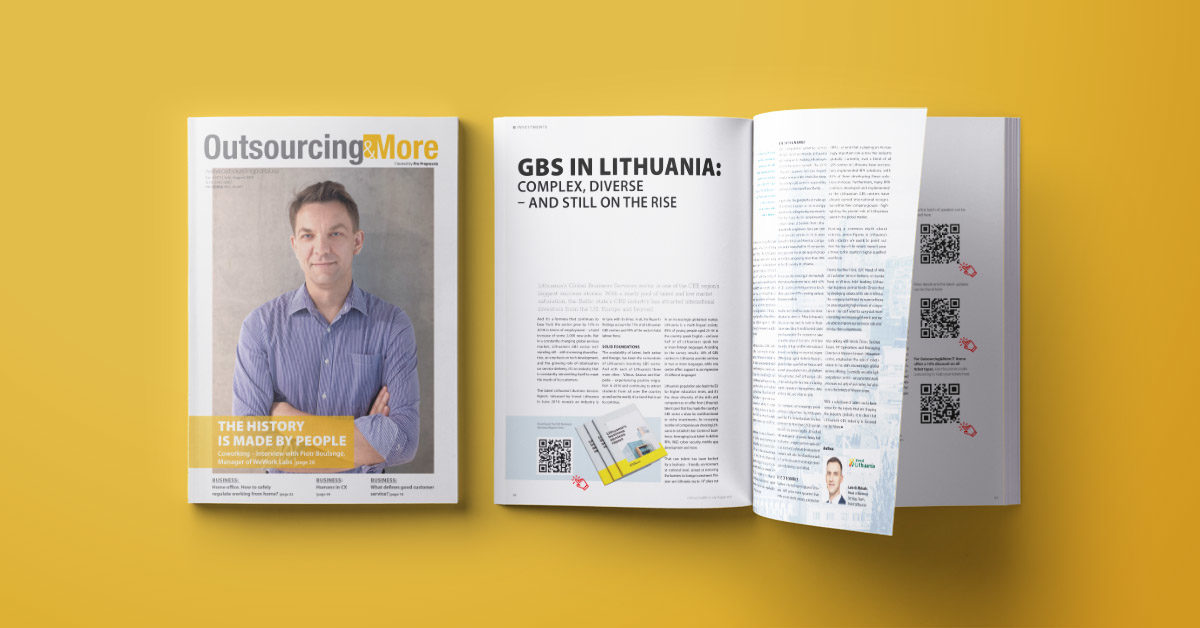 GBS in Lithuania: complex, diverse – and still on the rise

The following article by Invest Lithuania’s Head of Business Services Team Laisvis Makulis first appeared in the Outsourcing&More magazine. You can find the original here.

Lithuania’s Global Business Services sector is one of the CEE region’s biggest success stories. With a ready pool of talent and low market saturation, the Baltic state’s GBS industry has attracted international investors from the US, Europe and beyond. And it’s a formula that continues to bear fruit: the sector grew by 13% in 2018 in terms of employment – a total increase of some 2,000 new jobs. But in a constantly changing global services market, Lithuania’s GBS sector isn’t standing still – with increasing diversification, an emphasis on tech development, and the growing role of robotisation on service delivery, it’s an industry that is constantly reinventing itself to meet the needs of its customers.

The latest Lithuania’s Business Services Report, released by Invest Lithuania in June 2019, reveals an industry is in tune with its times. In all, the Report’s findings account for 75% of all Lithuanian GBS centres and 95% of the sector’s total labour force.

The availability of talent, both native and foreign, has been the cornerstone of Lithuania’s booming GBS sector. And with each of Lithuania’s three main cities – Vilnius, Kaunas and Klaipeda – experiencing positive migration in 2018 and continuing to attract students from all over the country as well as the world, it’s a trend that is set to continue.

In an increasingly globalised market, Lithuania is a multi-lingual society. 85% of young people aged 25-34 in the country speak English – and over half of all Lithuanians speak two or more foreign languages. According to the survey results, 58% of GBS centres in Lithuania provide services in two or more languages, while one centre offers support in an impressive 35 different languages!

Lithuania’s population also leads the EU for higher education levels, and it’s the sheer diversity of the skills and competences on offer from Lithuania’s talent pool that has made the country’s GBS sector a draw for multifunctional or niche investments. An increasing number of companies are choosing Lithuania to establish their Centres of Excellence, leveraging local talent to deliver RPA, R&D, cyber security, mobile app development and more.

That raw talent has been backed by a business – friendly environment at national level, aimed at removing the barriers to foreign investment. This year saw Lithuania rise to 14th place out of the 190 countries globally that make up the World Bank’s ‘Ease of Doing Business’ ranking – the highest place in the CEE region, even outstripping the performance of well-established locations such as Ireland (23rd) and Germany (24th). Furthermore, for the past five years in a row, the capital Vilnius has been awarded the best location for Global Business Services in the CEE at the CEE Business Services Summit and Awards. The city has become the destination of choice for big names such as Moody’s, McKesson, Danske Bank, Western Union, Nasdaq and Booking.com to offer increasingly diverse services to a global GBS market.

Despite its success, Lithuania’s GBS sector hasn’t yet reached the point of over-saturation. In Vilnius just 26 people per 1,000 residents are employed in the GBS sector, highlighting lower market saturation than rivals in the CEE region such as Warsaw, Budapest and Prague, and less than a third of the level seen in regional hubs such as Krakow. Lithuania’s second-largest city, Kaunas, enjoys even lower market saturation, with just 9.5 people per 1,000 being employed in the GBS centres – indicating plenty of room for growth in the country’s two-city GBS hub.

Furthermore, Lithuania still benefits from a plentiful supply of commercial real estate. The vacancy rate for class A office space in Vilnius increased from 2.7% to 5% in 2018, with further developments giving rise to a forecasted increase of 218,000 m2 between 2019 and 2020. In addition to the Lithuanian capital, Kaunas remains a tenant’s market, with record supply producing a healthy 11.9% vacancy rate.

Eye on the market

With competition growing across the GBS sector worldwide, Lithuania isn’t relying on its existing advantages to drive the sector’s growth. The 2019 Lithuania’s Business Services Report reveals a number of key trends that show the country’s GBS sector is responding to changes in the market worldwide.

In particular, the geographical make-up of investors displays an increasingly global reach, with growing investments from the US and the UK complementing a steady stream of business from Lithuania’s Nordic neighbours. Sixty per cent of all new GBS centres in 2018 were opened by British and American companies, which means that the US companies now represent the single largest group of investors, employing more than 30% of the GBS industry in Lithuania.

Centres are also servicing an increasingly international customer base, with 42% of GBS facilities providing services to US clients and even 97% covering various European markets.

Another key trend has been the diversification of services. While Lithuania’s GBS sector may have its roots in financial services, lately its multifaceted talent pool has enabled the industry to take on a wider range of functions. 2018 saw the entry of high-profile international investors including a Fortune 500 company Moody‘s, global fertiliser manufacturer Yara, as well as a tech pioneer Bazaarvoice, all of whom have entrusted their Lithuanian GBS centres with top tier functions including logistics operations management, data analytics, R&D, and cyber security.

Tech represents an increasingly prominent area of GBS services. The 2019 survey found that IT is the most popular function, performed by more than 5,500 specialists and now accounting for 32% of all GBS employees in Lithuania. Nearly half of all centres surveyed perform back-end or as front-end software development functions, with other tech functions such as IT service desk and mobile app development following close behind.

Nowhere is the tech-savvy culture of Lithuania’s GBS sector more apparent than in the area of robotic process automation (RPA) – a trend that is playing an increasingly important role across the industry globally. Currently, over a third of all GBS centres in Lithuania have successfully implemented RPA solutions, with 85% of them developing these solutions in-house. Furthermore, many RPA solutions developed and implemented in the Lithuanian GBS centres have already earned international recognition within their company groups – highlighting the pivotal role of Lithuanian talent in the global market.

Busting a common myth about robotics, senior figures in Lithuania’s GBS industry are quick to point out that this ‘rise of the robots’ doesn’t pose a threat to the country’s highly qualified workforce.

Rosita Vasilkevičiūtė, SVP, Head of AML at Customer Service Delivery at Danske Bank in Vilnius, told leading Lithuanian business journal Verslo Žinios that by deploying robots at its site in Vilnius, the company had freed its team to focus on areas requiring higher levels of competence: “Our staff want to carry out more interesting and meaningful work, and we are able to improve our retention rate and develop their competencies.”

Also talking with Verslo Žinios, Šarūnas Šuipis, VP Operations and Managing Director of Western Union’s Lithuanian centre, emphasises the role of robotisation in his site’s increasingly global service offering: “Essentially, we are a high competence centre – we automate work processes not only at our centre, but also across the entirety of Western Union.”

With a solid base of talent and a keen sense for the trends that are shaping the industry globally, it is clear that Lithuania’s GBS industry is focused on the future.