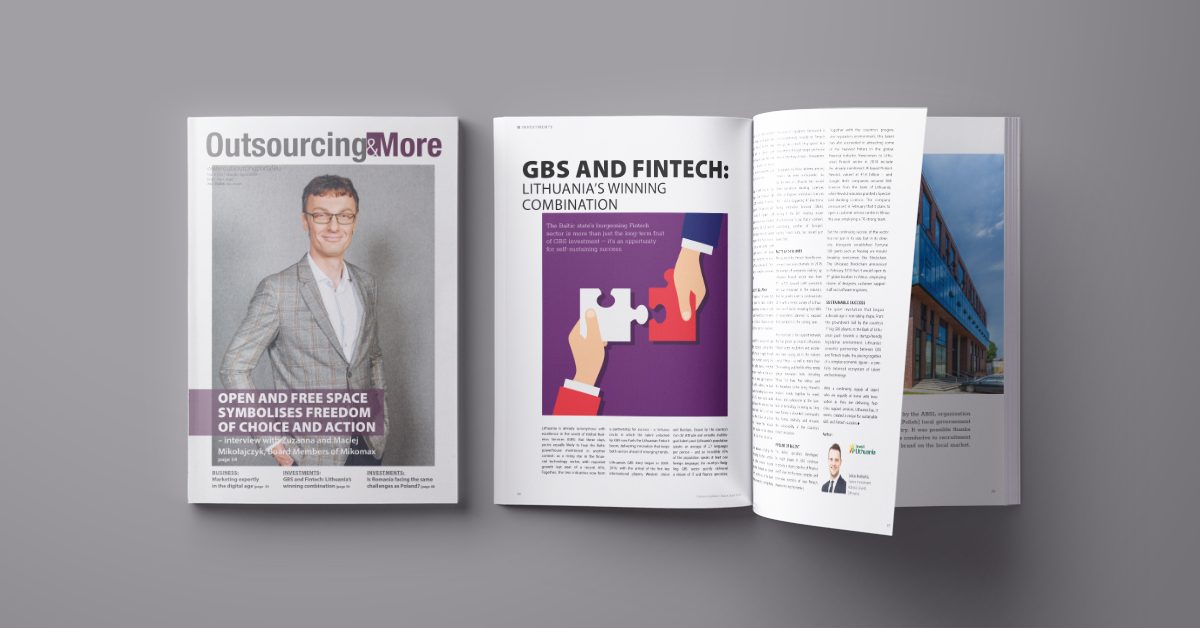 The Baltic state’s burgeoning Fintech sector is more than just the long-term fruit of GBS investment – it’s an opportunity for self-sustaining success.

Lithuania is already synonymous with excellence in the world of Global Business Services (GBS). But these days, you’re equally likely to hear the Baltic powerhouse mentioned in another context: as a rising star in the financial technology sector, with reported growth last year of a record 45%. Together, the two industries now form a partnership for success – a ‘virtuous circle’, in which the talent unlocked by GBS now fuels the Lithuanian Fintech boom, delivering innovation that keeps both sectors ahead of emerging trends.

Lithuania’s GBS story began in 2009-2010, with the arrival of the first key international players, Western Union and Barclays. Drawn by the country’s ‘can do’ attitude and versatile, multilingual talent pool (Lithuania’s population speaks an average of 2.7 languages per person – and an incredible 97% of the population speaks at least one foreign language), the country’s fledgling GBS sector quickly delivered a stream of IT and finance specialists. The effect of this skills explosion became evident a couple years later. Specialists who had received their training with big players such as Barclays began to create their own startups – or to attract the interest of more disruptive newcomers such as ride-sharing service Uber.

That supply of talent shows no sign of drying up. Today, Lithuania’s GBS sector boasts more than 70 centres, employing over 17,000 specialists delivering services in 35 languages – yet the market is nowhere near saturated. The award-winning GBS hub centred around the cities of Vilnius and Kaunas remains a magnet for major international operators. International credit ratings giant Moody’s, Dutch travel industry giant Booking.com, and international IT services company HCL Technologies were among the newcomers in 2018.

While the growth of Lithuania’s GBS sector provided the talent, another vital ingredient was necessary to spark the country’s Fintech boom: the emergence of the Bank of Lithuania as one of Europe’s most progressive regulators.

A series of reforms have cut red tape and sped up processes – giving Lithuania’s Fintech sector the agility it needs to succeed. Streamlined licensing procedures enables financial institution licences to be granted in as little as six months – the fastest approval process within the EU. In addition, the Bank of Lithuania’s “lite” banking licence introduced in 2017 requires initial capital of just €1 million – five times less than a standard banking licence. Last year, Revolut – the ambitious UK unicorn seeking to become “the Amazon of Banking” became the first international entity to be granted this licence.

Regulatory sandboxes, including the ground-breaking blockchain sandbox LBChain, enable innovative financial products to be developed and tested under the watchful eye of the Bank of Lithuania, before being scaled globally.

The country’s regulatory framework is now exceptionally friendly to Fintech start-ups. As a result, they spend less time jumping through hoops, and more time on what they do best – innovation.
The appetite for these reforms among Fintechs has been enthusiastic. So far, the Bank of Lithuania has issued three Specialised Banking Licences (SPBs), 33 Payment Institution licences (PIs) – and a staggering 47 Electronic Money Institution licences (EMIs), making it the EU’s leading issuer of such licences. To put that in context, Luxembourg, another of Europe’s leading Fintech hubs, has issued just seven EMIs.

The results of this Fintech-friendly environment have been dramatic. In 2018, the number of companies making up Lithuania’s Fintech sector rose from 117 to 170. Around 2,600 specialists are now employed in the industry. And this growth is set to continue into 2019, with a recent survey of Lithuania’s Fintech sector revealing that 88% of respondents planned to expand their operations in the coming year.Also important is the support network that has grown up around Lithuania’s Fintech sector. Incubators and accelerators have sprung up in the nation’s capital, Vilnius – as well as more than 20 co-working and flexible office rental spaces. Innovation hubs including Vilnius Tech Park, Rise Vilnius and the Blockchain Centre bring Fintech’s brightest minds together to meet, discuss and collaborate at the forefront of technology. In doing so, they have formed a close-knit community that fosters creativity and ensures the sustainability of the country’s Fintech revolution.

The skilled specialists developed by major players in GBS continue to provide a steady pipeline of finance and IT talent for the more complex and innovative functions of new Fintech players entering the market.
Together with the country’s progressive regulatory environment, this talent has also succeeded in attracting some of the heaviest hitters in the global financial industry. Newcomers to Lithuania’s Fintech sector in 2018 include the already mentioned UK-based Fintech Revolut, valued at €1.6 billion – and Google. Both companies secured EMI licences from the bank of Lithuania, while Revolut was also granted a Specialised Banking Licence. The company announced in February that it plans to open a customer service centre in Vilnius this year, employing a 70-strong team.

But the continuing success of the sector lies not just in its size, but in its diversity. Alongside established Fortune 500 giants such as Nasdaq are mould-breaking newcomers like Blockchain. The UK-based Blockchain announced in February 2019 that it would open its 5th global location in Vilnius, employing dozens of designers, customer support staff and software engineers.

The quiet revolution that began a decade ago is now taking shape. From the groundwork laid by the country’s first big GBS players, to the Bank of Lithuania’s push towards a startup-friendly legislative environment, Lithuania’s powerful partnership between GBS and Fintech marks the piecing together of a complex economic jigsaw – a carefully balanced ecosystem of talent and technology.

With a continuing supply of talent who are equally at home with innovation as they are delivering first-class support services, Lithuania has, it seems, created a recipe for sustainable GBS and Fintech success.