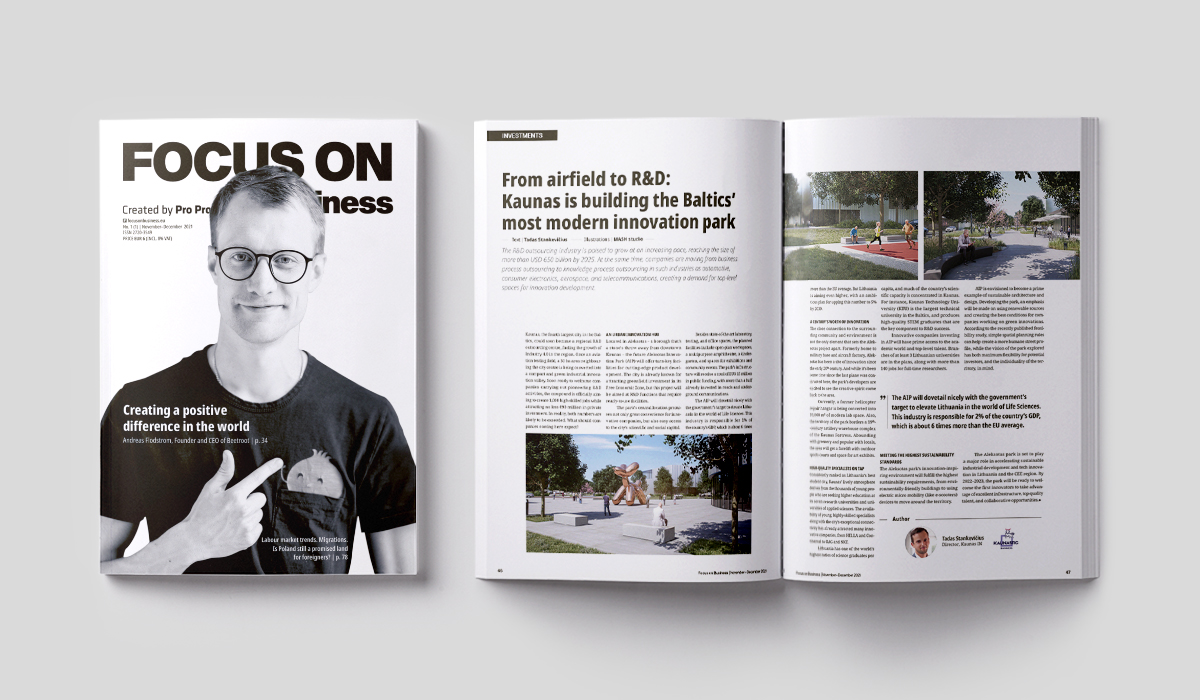 From airfield to R&D: Kaunas is building the Baltics’ most modern innovation park

The R&D outsourcing industry is poised to grow at an increasing pace, reaching the size of more than USD 650 billion by 2025. At the same time, companies are moving from business process outsourcing to knowledge process outsourcing in such industries as automotive, consumer electronics, aerospace, and telecommunications, creating a demand for top-level spaces for innovation development.

Kaunas, the fourth largest city in the Baltics, could soon become a regional R&D outsourcing centre, fueling the growth of Industry 4.0 in the region. Once an aviation testing field, a 30 ha area neighbouring the city centre is being converted into a compact and green industrial innovation valley. Soon ready to welcome companies carrying out pioneering R&D activities, the compound is officially aiming to create 1,000 high-skilled jobs while attracting no less €90 million in private investment. In reality, both numbers are likely to be exceeded. What should companies coming here expect?

Located in Aleksotas – a borough that’s a stone’s throw away from downtown Kaunas – the future Aleksotas Innovation Park (AIP) will offer turn-key facilities for cutting-edge product development. The city is already known for attracting greenfield investment in its Free Economic Zone, but this project will be aimed at R&D functions that require ready-to-use facilities.

The park’s central location promises not only great convenience for innovative companies, but also easy access to the city’s scientific and social capital.

Besides state-of-the art laboratory, testing, and office spaces, the planned facilities include open-plan workspaces, a multipurpose amphitheatre, a kindergarten, and spaces for exhibitions and community events. The park’s infrastructure will receive a total of EUR 15 million in public funding, with more than a half already invested in roads and underground communications.

The AIP will dovetail nicely with the government’s target to elevate Lithuania in the world of Life Sciences. This industry is responsible for 2% of the country’s GDP, which is about 6 times more than the EU average. But Lithuania is aiming even higher, with an ambitious plan for upping this number to 5% by 2030.

A century’s worth of innovation

The close connection to the surrounding community and environment is not the only element that sets the Aleksotas project apart. Formerly home to military base and aircraft factory, Aleksotas has been a site of innovation since the early 20th century. And while it’s been some time since the last plane was constructed here, the park’s developers are excited to see the creative spirit come back to the area.

Currently, a former helicopter repair hangar is being converted into 10,000 m2 of modern lab space. Also, the territory of the park borders a 19th-century artillery warehouse complex of the Kaunas Fortress. Abounding with greenery and popular with locals, the area will get a facelift with outdoor sports courts and space for art exhibits.

Consistently ranked as Lithuania’s best student city, Kaunas’ lively atmosphere derives from the thousands of young people who are seeking higher education at its seven research universities and universities of applied sciences. The availability of young, highly-skilled specialists along with the city’s exceptional connectivity has already attracted many innovative companies, from HELLA and Continental to OAG and NKT.

Lithuania has one of the world’s highest ratios of science graduates per capita, and much of the country’s scientific capacity is concentrated in Kaunas. For instance, Kaunas Technology University (KTU) is the largest technical university in the Baltics, and produces high-quality STEM graduates that are the key component to R&D success.

Innovative companies investing in AIP will have prime access to the academic world and top-level talent. Branches of at least 3 Lithuanian universities are in the plans, along with more than 140 jobs for full-time researchers.

The Aleksotas park’s innovation-inspiring environment will fulfill the highest sustainability requirements, from environmentally-friendly buildings to using electric micro mobility (like e-scooters) devices to move around the territory.

AIPP is envisioned to become a prime example of sustainable architecture and design. Developing the park, an emphasis will be made on using renewable sources and creating the best conditions for companies working on green innovations. According to the recently published feasibility study, simple spatial planning rules can help create a more humane street profile, while the vision of the park explored has both maximum flexibility for potential investors, and the individuality of the territory, in mind.

The Aleksotas park is set to play a major role in accelerating sustainable industrial development and tech innovation in Lithuania and the CEE region. By 2022-2023, the park will be ready to welcome the first innovators to take advantage of excellent infrastructure, top-quality talent, and collaborative opportunities. 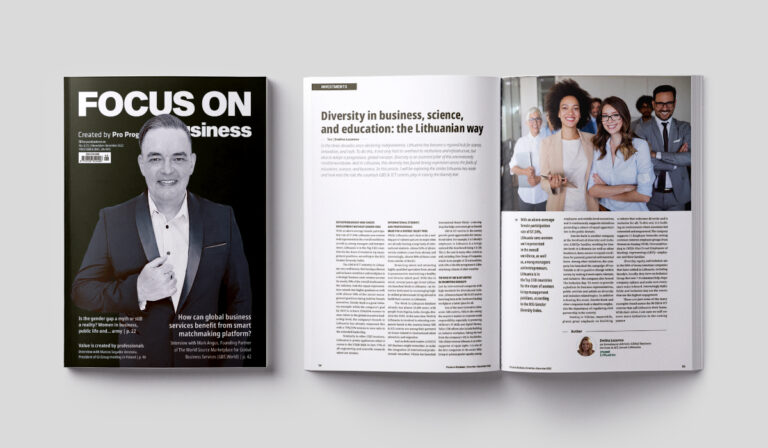