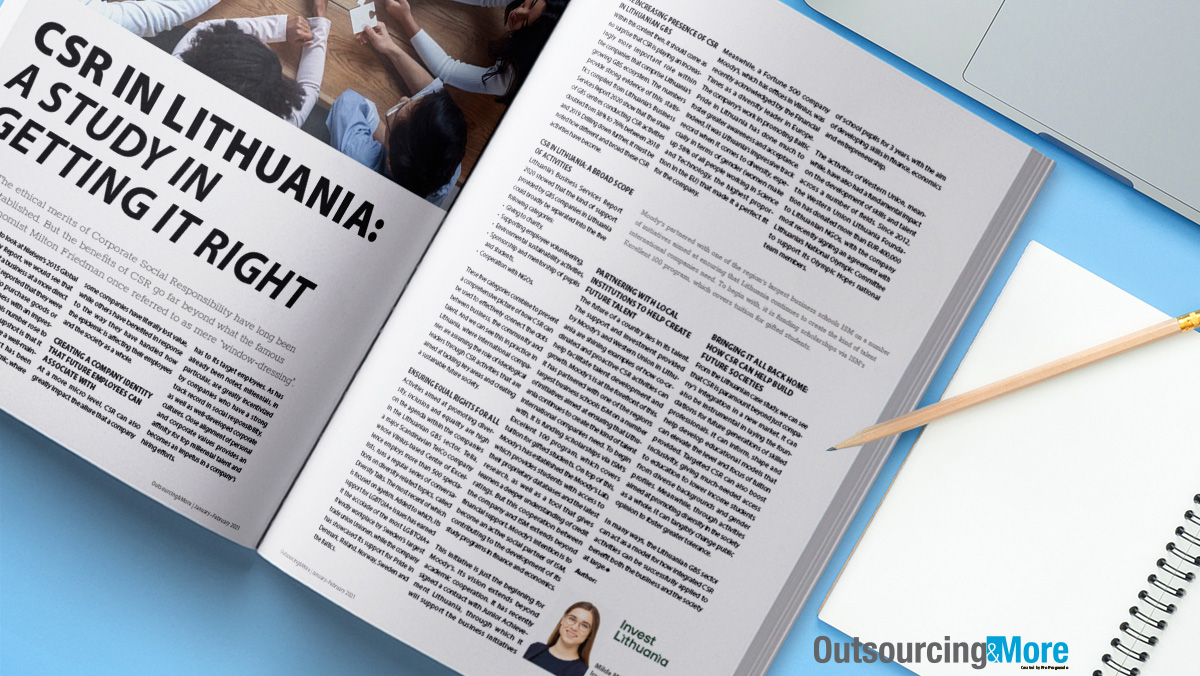 CSR in Lithuania: a study in getting it right

The following article by Milda Miliūnė, Investment Advisor, Business services & ICT at Invest Lithuania first appeared in the Outsourcing&More magazine. You can find the original here.

The ethical merits of Corporate Social Responsibility have long been established. But the benefits of CSR go far beyond what the famous economist Milton Friedman once referred to as mere “window-dressing”. If we were to look at Nielsen’s 2015 Global Sustainability Report, we would see that CSR can impact a business at a more direct level. Consumers reported that they were 66% more likely to purchase goods or services from a business with an impressive CSR record. And this number rose to 73% for millennials. The upshot is that it pays for companies to have a well-maintained CSR profile. This fact has been amplified by the current pandemic, where some companies have literally lost value, while others have benefited in response to the way they have handled how the epidemic is affecting their employees and the society as a whole.

Creating a company identity that future employees can associate with

At a more micro level, CSR can also greatly impact the allure that a company has to its target employees. As has already been noted, millennials, in particular, are greatly incentivized by companies who have a strong track record in social responsibility, as well as well-developed corporate cultures. Close alignment of personal and corporate values provides an affinity for top millennial talent and becomes an impetus in a company’s hiring efforts.

The increasing presence of CSR in Lithuanian GBS

Within this context then, it should come as no surprise that CSR is playing an increasingly more important role within the companies that comprise Lithuania’s growing GBS ecosystem. The numbers provide strong evidence of this: statistics compiled from Lithuania’s Business Services Report 2020 show that the share of GBS centres conducting CSR activities doubled from 38% to 76% between 2018 and 2019. Drilling down further, it must be noted how different and broad these CSR activities have become.

CSR in Lithuania: a broad scope of activities

Lithuania’s Business Services Report 2020 showed that the kind of support provided by GBS companies in Lithuania could broadly be separated into the five following categories:

These five categories combine to present a comprehensive picture of how CSR can be used to effectively connect the dots between business, the community and talent.  And we can see this in practice in Lithuania, where international companies are assuming the role of ideological leaders through CSR activities that are aimed at tackling key areas and creating a sustainable future society.

Ensuring equal rights for all

Activities aimed at promoting diversity, inclusion and equality are high on the agenda within the companies in the Lithuanian GBS sector. Telia, a major Scandinavian TelCo company whose Vilnius-based Centre of Excellence employs more than 500 specialists, runs a regular series of conversations on diversity-related topics, called Diversity Talks. The most recent of which is focused on ageism. Added to which, its support for LGBTQIA+ issues has earned it the accolade of the most LGBTQIA+ friendly workplace by Sweden’s largest trade union Unionen, while the company has showcased its support for Pride in Denmark, Finland, Norway, Sweden and the Baltics.

Meanwhile, a Fortune 500 company Moody’s, which has offices in Vilnius, was recently acknowledged by the Financial Times as a diversity leader in Europe. The company’s work in promoting Baltic Pride in Lithuania has done much to foster greater awareness and acceptance. Indeed, it was Lithuania’s impressive track record when it comes to diversity, especially in terms of gender (women make up 58% of all people working in Science and Technology, the highest proportion in the EU) that made it a perfect fit for the company.

The future of a country lies in its talent. The support and investment provided by Moody’s and Western Union in Lithuania are shining examples of how co-ordinated and proactive CSR activities can help facilitate talent development and growth. Moody’s is at the forefront of this. It has partnered with one of the region’s largest business schools ISM on a number of initiatives aimed at ensuring that Lithuania continues to create the kind of talent international companies need. To begin with, it is funding scholarships via ISM’s Excellent 100 program, which covers tuition for gifted students. On top of this, Moody’s has established the Moody’s Lab, which provides students with access to their proprietary databases and the latest research, as well as a tool that gives learners a deeper understanding of credit ratings. But this cooperation between the company and ISM extends beyond financial support. Moody’s intention is to become an active social partner of ISM, contributing to the development of its study programs in finance and economics.

This initiative is just the beginning for Moody’s. Its vision extends beyond academic cooperation. It has recently signed a contract with Junior Achievement Lithuania, through which it will support the business initiatives of school pupils for 3 years, with the aim of developing skills in finance, economics and entrepreneurship.

The activities of Western Union, meanwhile, have also had a fundamental impact on the development of skills and talent across a number of fields. Since 2012, the Western Union Lithuania Foundation has donated more than EUR 400,000 to Lithuanian NGOs, with the company most recently signing an agreement with Lithuania’s National Olympic Committee to support its Olympic Hopes national team members.

Bringing it all back home: how CSR can help build future societies

From the Lithuanian case study, we can see that CSR is paramount beyond just company’s integration in a new market. It can also be instrumental in laying the foundations for future generations of skilled professionals. It can inform, shape and help develop educational models that can elevate the level and focus of tuition provided. Targeted CSR can also boost inclusivity, giving much-needed access to education to lower income students from diverse backgrounds and gender profiles. Meanwhile, through activities aimed at promoting diversity in the society as a whole, it can tangibly change public opinion to foster greater tolerance. In many ways, the Lithuanian GBS sector can act as a model for how integrated CSR activities can be successfully applied to benefit both the business and the society at large.