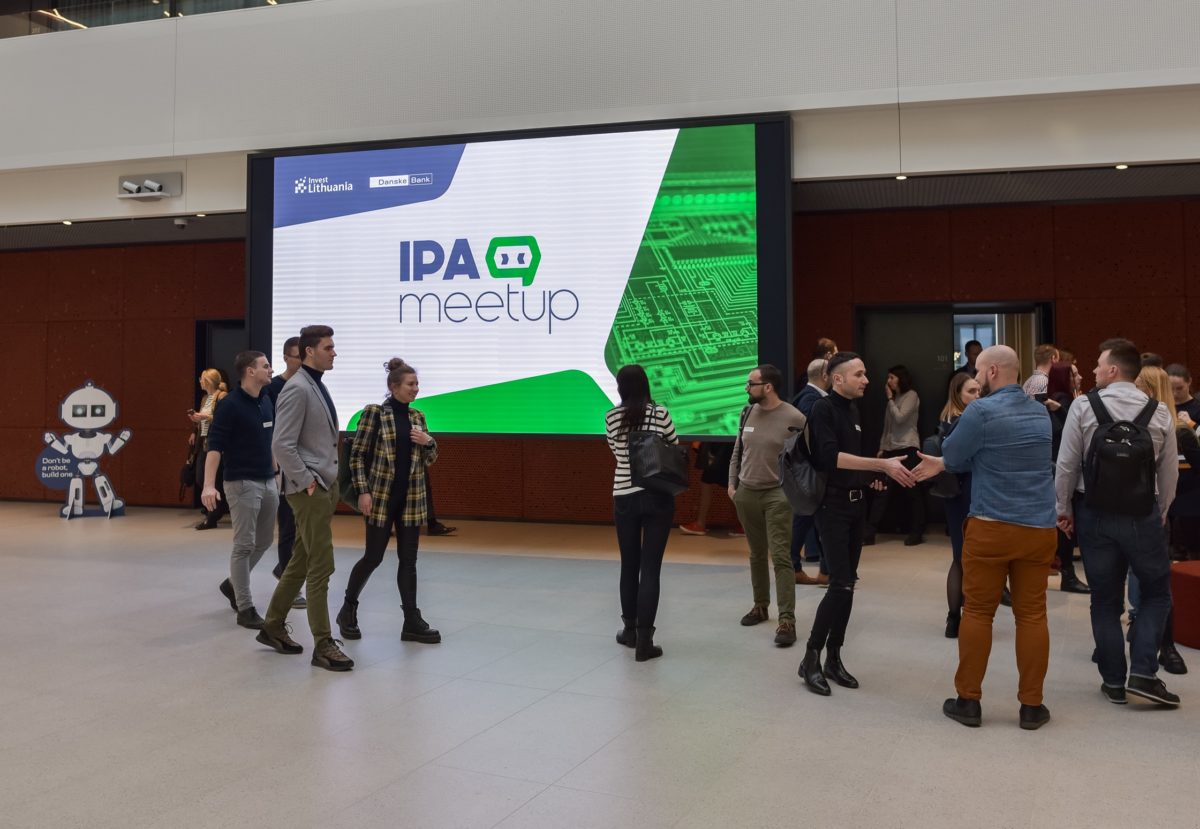 Challenges and opportunities for business process automation community in Lithuania

Almost all foreign capital business service centres in Lithuania empowers process automation as a part of their daily operations. However, there is a lack of a broader debate regarding the economic impact of robotization – according to the organizers of the IPA meetup conference organized in Lithuania for the second time. There are also few opportunities to share the experience and success stories in this field and a shortage of training programmes for the employees, all resulting in the race for talent.

Automation in the business services centres of the international companies in Lithuania has been progressing over the past years. According to Invest Lithuania, at least one third of centres have automated their business processes – at the end of 2018, there were over 617 robots or 80% more compared with the previous years. The companies using robots have automated an average of 13% of their operations and 35% of the companies started to implement more complex autonomous and intelligent automation solutions. According to Laisvis Makulis, head of business services and ICT at Invest Lithuania, this shows the need to establish the ecosystem of such enterprises.

“In many of the organizations that apply the new solutions, everything started from the initiative of a few employees, who developed individual hotkeys or functions that speeded up the workflow on Microsoft Excel. Although technology is becoming more complex, there is a lack of space in Lithuania for people to share their knowledge and solve the issues arising in the course of robotization. We hope that Lithuania will become a hub of automation and artificial intelligence in Europe,” Makulis noted.

The IPA meetup conference, organized in Lithuania for the second time, aims to bring together all automation specialists for knowledge exchange and networking, hoping this will positively impact the overall technological climate in the country.

Rokas Piškovas, head of the Robotics Development Team at Danske Bank, stressed that automation processes have more than one definition. One of them is the name of the IPA meetup conference. The term IPA (“Intelligent Process Automation”) defines organizational change and integral preparation for automation, and application of data analytics or algorithms that pay for themselves.

“Although each specific automation task is different, when combined they can automate the entire chain of business operations. This subverts the conviction that automation is only relevant for IT professionals (business process analysts and engineers, information system or their solution architects), but also for many other functional specialists,” Piškovas said.

Piškovas considers that the main advantage of automation is freeing up employees from mundane tasks. It reduces the probability of human error and costs, while also increasing efficiency. One of the main myths related to the IPA installation, the conference tries to bust, is that robots will take away people’s jobs.

“Process automation will not take away jobs but will free people from mundane and repetitive jobs. The employees will be able to perform tasks of a greater added value and utilise their creative potential,” Piškovas explained.

Changes needed in the education system

In a long-term, Lithuania not only seeks to extend the implementation of the basic level of process automation but also expects to adapt higher level solutions. The participants of the IPA meetup note that this requires the use of machine learning, artificial intelligence and intelligent automation while this will not be possible without changes in both business and the education system.

“Currently the organizations that apply automation train their own employees through talent programmes or similar measures. So far robotization modules at the university have only been optional subjects, so it is necessary to look for opportunities in the educational system to train specialists. Companies are cautious about employee professional growth as their training is a time consuming process paid by companies,” said Šarūnas Grigas, manager of the RPA Centre of Excellence and the Lead of the Finnish steel product company Outokumpu, that started the implementation of IPA tools in 2020.

State authorities should also contribute to the creation of the environment for automation. Incentives and tools for the development of automation would allow Lithuania to produce higher added value, attract new services centres and investment in the future. Businesses must also get ready for change.

“Although IPA will not take away jobs from employees, the companies that ignore automation may lose their competitive advantage. Automation cannot be installed blindly – first of all, it is necessary to evaluate the problem, clarify the change strategy and know the aims pursued through the use of technology,” summed up Piškovas.