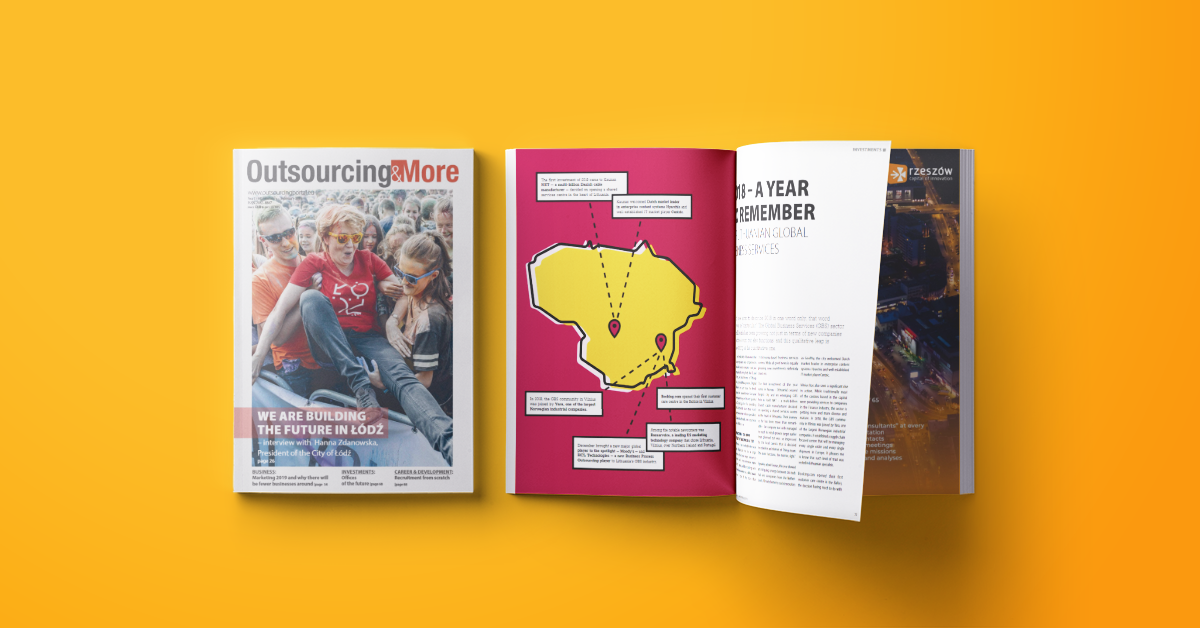 2018 – a year to remember for Lithuanian Global Business Services

The following article by Laisvis Makulis, Head of Business Services Team at Invest Lithuania, was first published in Outsourcing&More magazine. Please follow this link to access the whole issue.

If I were asked to describe 2018 in one word only, that word would be “spectacular.” The Global Business Services (GBS) sector in Lithuania has been growing not just in terms of new companies and headcount, but also functions, and this qualitative leap is as exciting as the quantitative one. It shows the flexibility of the market that can offer specialists and competencies in a wide range of domains – not just in traditionally strong fields like IT and Finance, but also Internet of Things (IoT), Transport Management, Digital Marketing and many more. The developments we have witnessed last year make my heart sing, and I’m very grateful to Outsourcing&More for providing me a platform to share this yearly review with so many industry specialists. So, without further ado, here is our year, one of the best so far.

Newcomers – too many to list but we can still try

If you look at our newsfeed for the year, you will probably not find a single month without some major announcement – be it an entirely new name on the market, a ribbon-cutting ceremony for a new office or a global award given to one of the more than 70 Lithuania-based business services centres. While all good news is equally pleasing, new investments definitely stand out.

The first investment of the year came to Kaunas – Lithuania’s second largest city and an emerging GBS hub in itself. NKT – a multi-billion Danish cable manufacturer decided on opening a shared services centre in the heart of Lithuania. Their journey so far has been more than remarkable – the company not only managed to reach its initial growth target earlier than planned but was so impressed by the local talents that it decided to establish an Internet of Things team. The more functions, the merrier, right?

Speaking about Kaunas, this year showed an intriguing synergy between this tech hub and companies from the Netherlands. Already home to such innovators as GeoPhy, the city welcomed Dutch market leader in enterprise content systems Hyarchis and well-established IT market player Centric.

Vilnius has also seen a significant rise in action. While traditionally most of the centres based in the capital were providing services to companies in the Finance industry, the sector is getting more and more diverse and mature. In 2018, the GBS community in Vilnius was joined by Yara, one of the largest Norwegian industrial companies. It established a supply chain focused centre that will be managing every single order and every single shipment in Europe. It pleases me to know that such level of trust was vested in Lithuanian specialists.

Booking.com opened their first customer care centre in the Baltics, the decision having much to do with the multi-lingual aspect of the Lithuanian talent pool. And this is fact, not opinion. In Lithuania, the average number of languages spoken per person is 2.7, and 97.3% of the population speaks at least one foreign language. According to Lithuania’s Business Services Report 2018, presented by Invest Lithuania this autumn, a third of Lithuania-based centres operate in 6 languages or more.

Among the notable newcomers was Bazaarvoice, a leading US marketing technology company that chose Lithuania over Northern Ireland and Portugal. It took them less than a year to grow their Vilnius division responsible for technical support to 70 people, and we’re all excited to see what 2019 brings for this Big Data-driven company.

The complexity of operations that companies provide from Lithuania is increasing both when it comes to veterans of the sectors (Danske Bank, Western Union, Nasdaq) and newcomers. One of the prime examples of this is Catalyst – a UK-based global financial consulting company that came to Lithuania in May.

Vilnius also became a new home to two companies that have never had a division abroad before – Primo Interactive and Arctic Adventures. Primo Interactive is a UK web development and marketing agency and Arctic Adventures is an Icelandic tour operator with plans to go global in the nearest future. Both of them chose Lithuania for a whole range of reasons, talent being the top one, of course.

December brought a new major global player to the spotlight – Moody’s. Moody’s will most likely bring the complexity of function to yet unseen levels. This investment is as important to the country’s GBS sector as Barclays’ investment a decade earlier. The scope of this project covers multiple important positions that will support the company’s ratings and research businesses and operations in areas such as finance, HR  operations, information security, and IT. I am confident that it will open a whole new era for the industry here.

December has also brought a new Business Process Outsourcing player to Lithuania’s GBS industry. HCL Technologies will be taking over Barclays BGOL centre – that same historic and iconic centre that has catalyzed the development of the entire industry. While it is sad to see Barclays go, I believe that HCL Technologies will bring new practices in the promising field of BPO.

My sincere apologies if I have missed someone – as you have seen, there is so much going on!

Growth in all directions

Seeing new companies discover Lithuania is a huge pleasure, only equal to one I feel when thinking about how companies with already established operations are expanding. This year was no exception, with Danske Bank growing to almost 3000 employees, SEB hitting the 1000 employee mark, Kaunas-based FESTO (one of the first shared services centres in Lithuania!) moving to a brand new office, stainless steel market leader Outokumpu expanding ranks of finance specialists.

And it is not just about impressive numbers. The main trend we have seen over the years is that companies that might have started with rather basic functions do not wait too long before introducing complex ones. Take any centre at random that has been here for more than a year, and you’ll see Customer Support people working alongside Data Scientists, Machine Learning specialists, Developers, System Engineers and many others.

2018 was also a good year for Lithuanian GBS community to build stronger ties with international peers, while becoming even more tight-knit in the process. For the first time, Vilnius hosted the Autumn Edition of the biannual European Shared Services and Outsourcing Week. The conference provided the opportunity not just to learn about the latest trends in the industry, but also to visit two hallmark centres – those of Danske Bank and Western Union.

The conference was very well-received among the guests and the hosts. I sincerely hope that this will be the first of many events of this calibre to come to Lithuania in the coming years.

Another “first” actually comes this year, although the decision has been made in 2018. Connectivity has always been a major component in foreign direct investment attraction. And one of the drawbacks we have been facing was the lack of business flights to London. I am glad to say this is not an issue anymore, as starting this spring we will have direct business flights to London City Airport on a daily basis.

To sum up, this year once again solidified the notion that the Lithuanian GBS centre is strong, flexible, mature and diverse, with plenty of room to grow for both newcomers and incumbents. Going from strength to strength, I say with confidence that – as a country – we are ready to make this environment even better. If you have any suggestions, we at Invest Lithuania are always ready to lend an ear.